As the Marrakesh Climate Talks come to an end, there is no denying that the global political landscape has changed with Donald Trump’s election win. But the global climate community remains steadfast. As people from every continent who have spent our lives working for social justice, climate action, and a better future for all, we believe that this is the time for greater ambition, not backsliding.

Trump will soon be the first, self-declared climate denier, leading one of the world’s biggest emitters. In the face of this reality, both Francois Hollande of France and Bank Ki-moon clearly outlined the risks of quitting the Paris Agreement, while declaring that the shift from fossil fuels is unstoppable. China’s Vice Foreign Minister Liu Zhenmin also voiced his concern, going on record with Bloomberg to remind Trump that it was his Republican predecessors who started climate negotiations in the 1980s.

If the future president of the United States seeks to abandon his moral, diplomatic and legal commitments to stop climate change — an action which is opposed by the vast majority of his citizens — the rest of the world must increase the pace of its transition away from fossil fuels, not follow him into the cesspool of denial and inaction.

The Climate Vulnerable Forum (CVF) is putting into practice the leadership we should be seeing from all governments. Today, during the last day of the climate talks, its 48 member countries have pledged to update their Nationally Determined Contributions (NDCs) and prepare long-term low greenhouse gas development strategies as early as possible before 2020 while striving to meet 100% domestic renewable energy production as rapidly as possible.

This encouraging statement of climate action comes after the most damaging year yet for the fossil fuel industry. 2015 was a record year for renewable energy installations. Renewable power generating capacity saw its largest increase ever, with an estimated 147 gigawatts (GW) added. It was also the year that renewables have become cost competitive with fossil fuels. Divestment in coal and oil has reached a staggering US$3.4 trillion, as over 623 institutions from around the world have withdrawn their funds.

Through our activism we have also achieved so much, President Obama rejected the Presidential Permit for the Keystone XL tar sands pipeline, more recently Turkey cancelled a coal project and UNESCO just recommended cancelling a coal project near a heritage site in Bangladesh.

To make sure we keep up this transformation, the global climate, social, economic and human rights movement needs to keep up its momentum. This means that more people will be putting their lives and livelihoods on the line in the fight for climate justice. For this they need and deserve to be protected. 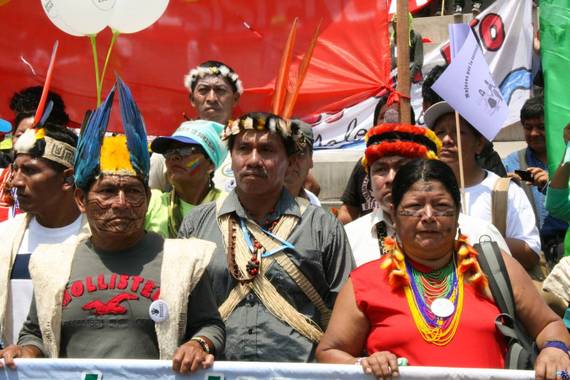 One thing Trump has reminded us of, are the inherent dangers of leaving people behind. This means that more than ever it is essential that we start working on a ‘Just Transition’. At its heart are the affected workers and communities – whether they are affected by climate impacts — or live in communities employed by the fossil fuel industry.

The transformation to clean, renewable energy is an enormous opportunity. We know there are millions of jobs waiting to be created with infrastructure investment projected to be up to US$90 trillion by 2030. There are jobs in renewable energy, construction, manufacturing and transport as we green every industry and build the mega cities that will accommodate population growth.

Governments, employers and labour unions need to immediately start working on redeployments, as well as education and training so workers can transition to new careers. They also need to include investment incentives to create new jobs. We also need to face reality and get ready to formalise the jobs in rescue, rebuilding and resilience associated with climate disasters.

Every step of the way, governments need to provide leadership in ensuring the transition to a carbon neutral economic system is built, by protecting the workers already losing their livelihoods from a dying industry, as well as to protect those already marginalised and impacted by the failed globalised economy.

So, as the countries that signed the Paris deal are finishing their meeting today, and releasing a letter laying out their plans to enforce the deal, we know it will not be enough. More than their words, we need their actions, which among many things must includeimmediately halting new coal, oil and gas development and financing a just transition towards a 100% renewable energy future for all.

The truth is that the Paris Agreement never rested on who is President in the United States. The deal was only reached thanks to a global movement that exists in every country, in every language, among people of every faith, all saying together that now is the time for action to stop dirty energy and build renewable energy that works for every one of us. We are seeing true leadership on climate action by those fighting against the fossil fuel industry in places such as Standing Rock in the US, Aïn Salah in Algeria, and everywhere else.

Our movement continues to be united — Trump or no Trump. The only time for action is — and will always be — now.

This post is part of a series produced by The Huffington Post, in conjunction with the U.N.’s 22nd Conference of the Parties (COP22) in Morocco (Nov. 7-18), aka the climate-change conference. The series will put a spotlight on climate-change issues and the conference itself. To view the entire series, visit here.