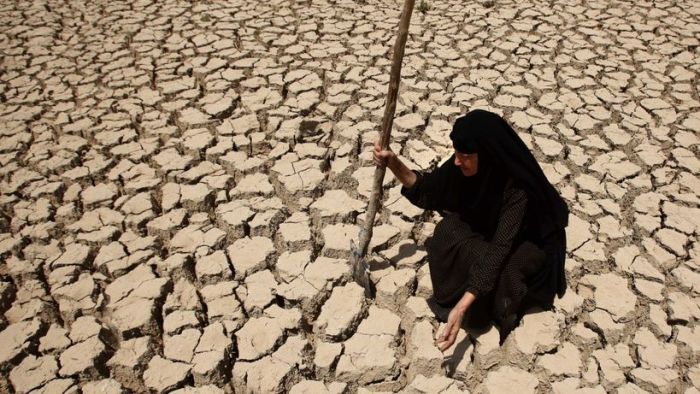 AP/HADI MIZBAN – In 2016 the Middle East experienced the hottest temperatures ever recorded on earth.

It is official – data from the UK Met Office, NASA and NOAA demonstrate beyond doubt that 2016 was the warmest year on record. Climate impacts are taking us into uncharted territory while still impacting the planet’s most vulnerable people.

While the Paris Climate Agreement sets important targets, government action remains insufficient to ensure we avoid the worst impacts of the climate crisis. Added to that, President Trump’s recent Energy Independence Executive Order, which suspends more than half a dozen measures enacted by his predecessor, will have serious global consequences. We’re at a critical juncture. Will governments move forward to meet the targets set in the Paris Agreement? Or will they go backwards?

We’ve seen the ability of the divestment movement to drive real action, by taking the fossil fuel industry to task for its culpability in the climate crisis, by naming its singularly destructive influence. We will keep on pushing, ensuring that the divestment movement can build on its on-going success, which has already led to commitments representing US$5.5 trillion in assets under management from over 700 institutions spanning 76 countries. Every time a respected institution publicly breaks its ties with fossil fuels, we chip away at its power to carry out immoral business plans, and we open up space for just climate solutions to flourish.

We can’t afford to stand-by waiting for our governments to do the right thing. So we intend to show true leadership this May by organising the Global Divestment Mobilisationwith one clear message globally: it is time to end the age of fossil fuels — because that’s what it really means to solve the climate crisis.

Through divestment we have seen the enactment of an immediate and transformational form of climate leadership which the world urgently needs. The coming Global Divestment Mobilisation provides a tangible way for individuals and institutions to partake in building the just world everyone deserves, away from political processes co-opted and corrupted by the industry. Already there are close to a 150 events planned across six continents. The urgency is plain for all to see as extreme weather events become increasingly common.

We have barely begun this year, and yet temperature records continue to be set, the US experienced an unusually warm February, and in Australia, the country suffered throughprolonged and extreme heat in many states. In Africa the extreme heat of 2016 is continuing into 2017, with much of Eastern Africa currently experiencing severe drought, leading to dire food shortages. The situation in Kenya, Ethiopia and Somalia is particularly precarious, where an estimated 12 million need food aid. Peru has suffered its worst downpours in decades that have triggered floods and landslides, killing at least 78 people and making around 70,000 homeless, leading to a state of emergency. These are all tell-tale outcomes of a dangerously warming climate.

Such extreme examples will only proliferate if the fossil fuel industry is allowed to burn all the carbon that is currently in operating fields and mines. We would far surpass 2C and experience worse climate impacts than those already mentioned. Yet fossil fuel companies are still being subsidised with billions of dollars allowing them to spend millions each day looking for more coal, oil and gas to dig. Continuing to invest in the fossil fuel industry means funding climate impacts.

If we are to prevent catastrophic warming, there can be absolutely no expansion of fossil fuel infrastructure. That means no new mines, no new drilling, no new pipelines. None at all. Our governments, universities, religious organizations, cultural institutions, pension providers, and more, must show leadership through divestment and cut ties with this destructive industry in order to curb the worst future impacts of climate change.

Thankfully we see positive signs that the world is already moving away from fossil fuels –investments in renewables are booming. Through divestment our goal is to expedite a just transition to a cleaner economy. This means investing in innovative industries such as renewable energy and sustainable agriculture. Communities affected by the move away from fossil fuels, need to be included in a social dialogue, so that transition plans from companies and local authorities ensure that people find new job opportunities and training to safeguard their livelihoods. It’s not people that should pay the cost of this transition, it is the corporations that have delayed, stymied and denied climate change.

This May, we’re coming together globally, to escalate and spread our campaigns for divestment. It’s time for all our institutions to do what is morally right and divest from disaster. These peaceful worldwide mobilisations taking place will serve as an important point in humanity’s trajectory. We need to divest to keep the planet like the one we inherited: vibrant, flourishing and with a stable climate.